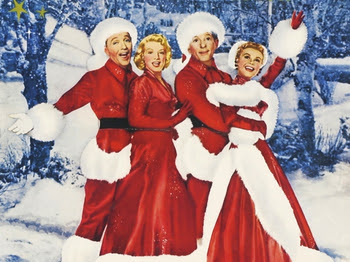 Tagline: "Joyous entertainment for every season, any year!" 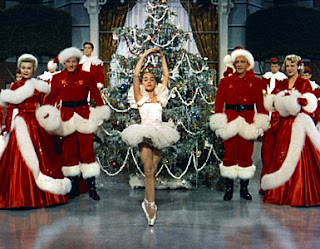 During World War II, two great friends Bob Wallace (Crosby) and Phil Davis (Kaye) fought together in the same army troop. Davis and Wallace decide once they get out of the war to start a great singing/dancing team together. They hit it big and go on the road and television and make a name for themselves. During this time Davis meets the lovely Haynes sisters whom are doing a show at a club and he is smitten with them! Betty Haynes (Clooney) is the oldest of the two and is very protective of her little sister. The eldest sister is the elegant and torch song singer while the younger Haynes sister being Judy (Ellen) is very leggy and a very talented dancer.


Judy is very outgoing and wants to loosen her big sister's control over her. Judy and Phil find each other very smitten with one another and then decide to play cupid with Wallace and Betty whom are dead set against the idea. The Haynes sister's also bestow onto the team of Wallace & Davis information that is interesting which is that the Haynes brother was in the same army unit as they were in, they remeber him and he has no resemblence to them at all! The Haynes sisters have not hit it big yet and owe several creditors a lot of compensation so this is where Wallace and Davis decide to help them escape the police from the debt and move up and onwards! With the help of the two gentlemen the Haynes Sisters will be a great act hitting the big time. 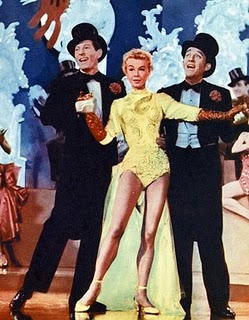 Davis decides to make a bit of a switch in his acts plans of a trip and follow the lovely Haynes sisters to Vermont for Christmas where they are slated to do shows at a local inn. All of this reveals many lovely opportunities for great tunes from the famed writer Irving Berlin. To Wallace and Davis's surprise the inn they are all attending is owned and runned by there old Commanding Officer, Major General Tom Waverly (Jagger) with the help of a funny assistant Emma Allen (Wickes). They find out some horrible information that the floor show is no longer required due to the fact that the Waverly is going to have to forgo the inn and go bankrupt due to the poor attendance since the lack of snow. This makes all four parties decide to help in a big way to save the inn. Wallace and Davis bring the entire Broadway show along with the cast to the inn of "Playing Around" that they are part of and place the Haynes sisters in it as well. Some drama ensues but all of these four are there to save the day and do see a "White Christmas" after all!!!

Some great noteable musical numbers in the film: "Snow!" "Sisters" "White Christmas (finale)" "Minstrel Number" ""Love, You Didn't Do Right By Me" "Count Your Blessings Instead of Sheep" & "Gee, I Wish I Was Back in the Army" this is one of the best Chrsitmas classics and a must see during the holiday season!