Week-end at the Waldorf (1945) Things Are Bound to Happen! 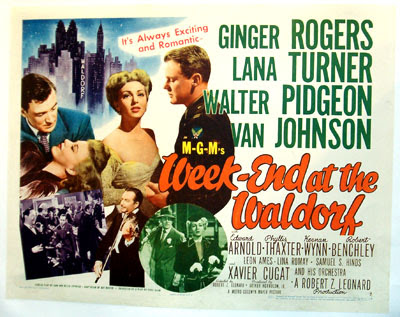 Taglines: "When Strangers Meet -- and Love -- Things Are Bound to Happen!"

Plot:
Many things can happen especially in the climate of WWII at the New York City's Waldorf-Astoria Hotel. Over a course of one weekend we follow a movie star whom is staying at the famed hotel named Irene Malvern (Rogers). Irene is a high maintenance dame that needs someone for every need though is getting burnt out from the Hollywood structure and demand. The lifestyle has taken a toll on her in a great way both emotionally and physically making her drained and needing time away from things to herself. While staying there meets a war correspondent Chip Collyer (Pidgeon) and thinks he is a thief after her jewels. During this same weekend a soldier Captain James Hollis (Johnson) finds out that he is very ill and requires an operation so looks to have a lovely romance with someone special to enjoy all the time he has. The solder Chip meets at the hotel a lovely young lady named Bunny Smith (Turner) whom is employed by the hotel as a stenographer. Bunny has dreams to someday move up and have bigger and better things. What an eventful one weekend at the Waldorf!

~ Irene is the costume designer for this film and did a lovely job especially on Ginger Rogers clothing, they are simply define in this film!