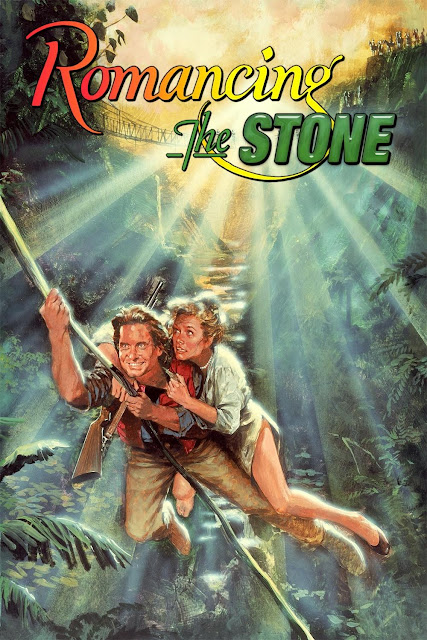 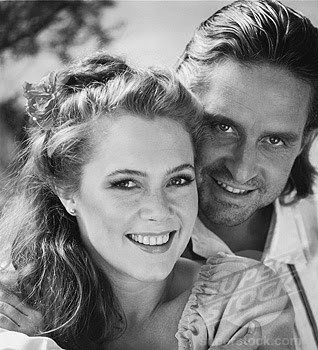 She's a girl from the big city. He's a reckless soldier of fortune. For a fabulous treasure, they share an adventure no one could imagine... or survive. 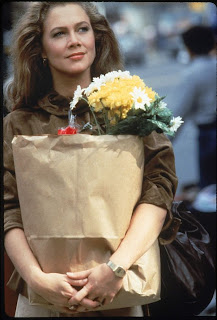 The great romance novelist who resides in NYC Joan Wilder (Turner) loves her stories of the lady at the end finding her true love. Though in real life for Joan love escapes her as she weeps in her apartment in her writing of the conclusion of her novel. Joan celebrates the  completion of yet another soon to be hit romance book that her lead man Jesse a dark shadow person is also perhaps the man in Joan's dreams. With all of the tissues used in the house she uses a note to blow her nose and then gets some wine and cat treats to celebrate her new triumph.

In the mail Joan receives a map sent by her recently murdered brother-in-law. Joan has no idea what the map is about and places it into her purse for safe keeping. Where we start to see a myserious man lurking outside the appartment building of Joan's.

Gloria (Holland) is Joan's publisher and comes to her rescue to get her out of the house and out into the social scene to meet some real life men worthy of her time rather than waiting for her fictional person who is never going to materialize. The ladies head to a trendy bar where Gloria has her priority on setting-up the very single Joan with a very handsome and unattached man. They sit and look around and Joan is very disinterested in the whole thing and decides to head back home. 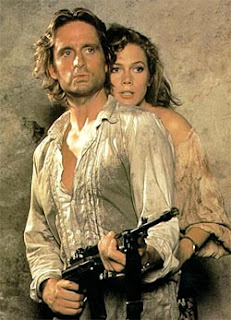 During this we see Joan's sister Elaine (Trainor) who is trying to quickly escape with glasses and a hat on and jump into her convertible which seems due to someone out to get her. Elaine moves the car out of the garage and then gets out and closes the the door and then heads back into the car to make her getaway while a boy with a sling is starting to play with it faster and faster and then throws it around Elaine's neck knocking her out. The boy run over jumps in and drives Elaine over to this yacht where this man named Ira (Norman) has kidnapped her.

We pan back to NYC where Joan is back at her apartment and someone has ransacked it looking for something. Then the phone wrings and it is her sister Elaine on the other end pleading that she heads down to Cartegena, Columbia now with the map to safe her life for a ransom. Joan accepts and hurridly packs items together and calls Gloria to tell her of the departure and is driven over to the airport with traveller's checks on hand and some money to safe her sister along with the map.

Ralph (DeVito) the cousin of Ira's who is also in on the kidnapping is following and making sure that Joan is doing everything she should be doing. Calling his cousin for updates along the way. Whie Joan has finally arrived in Columbia she asks what bus will take her to Cartegena and Colonel Zolo (Manuel Ojeda) directs her on the wrong bus that will take her into the opposite direction into the dangerous desolate jungles. Zolo gets onto the same bus with the plans on killing Joan and getting the very highly valued map. 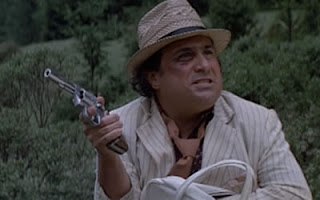 On the long bus trip Joan finally asks the driver about the destination and while not paying attention to the road hits into another crashed bus on the old dirt road. Everything goes flying everywhere. Joan is told by Zolo that the other "peasants" are fools and are leaving for no reason and that waiting right there for another bus is the answer which will happen in no time. This will give Zolo the perfect oppportunity to kill her and get the map. Everyone has left and all of a sudden the guns go off and Joan is scared and hides under the bus. In walks Jack T. Colton (Douglas) who is exporting a beautiful bird that is arriving on that same bus that Joan was on. Jack sees what is going on with Zolo and Joan while looking down from the road above and comes down to rescue her. He chases off Zolo at least for now and see's that his beloved bird is long gone. 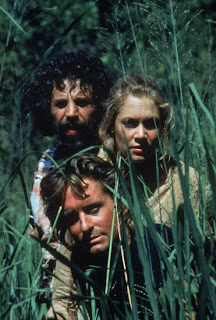 Jack tells Joan there will be no other bus coming on the route and he starts to walk off. Joan is now in the middle of the jungles lost and needs to get to her sister now and runs toward Jack with her luggage and pleads with him to assist her. Jack asks what she is in need for and says he is no tour guide and the conversation goes back and forth. Finally, Jack states that he will assist Joan for $375 and will get her to her destination. Joan is thrilled and now gives him her luggage to assist carrying for the remaining for the trip where he then throws off the road into the far off jungles. Joan is very angry and it is pouring rain and she start to hit him and then the ground opens up from underneath her and she literally is on the ride of her life of a mud slide through the jungle with Jack right behind her. Joan falls right into a huge thing of water in the jungle where then Jack a few seconds later falls and his face falls right into her lap and gets up laughing seeing her uncovered legs while Joan is crying. Joan is now getting welcome to the new world of traveling via the jungles where Jack cuts her heels off her shoes to make the trip easier on her then Zolo is back with men to get her and they are on the run! 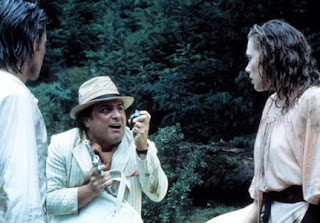 The run brings them to a very old and deserted bridge that they have to end up hanging onto a rope and holding onto dear life flying over to the other side to get away from Zolo. They make it and then have to cut their way through the high vegetation and find an old crashed plan which was smuggling marijuana. Jack and Joan are able to sleep the night in the plane and have a night of laughter with some alcohol found and burining the marijuana to stay warm. The next day they wonder into a village where they meet the one person who owns a vehicle that can get them to Cartagena named Juan (Alfonso Arau) who happens to be a drug lord and a major fan of Joan Wilder's romance novels. They meet and instantly hit it off and Juan agrees to drive them out of the village and get them where they need. They drive and wuickly the army with Zolo is fast behind them so there is a good chase!

Will Jack turn on Joan when he finds out about the map and the emerald called "El Corazon", and will Joan get to her sister in time to safe her, and maybe will love find Joan....you will have to watch the film to find out!!!! The film has great scenes of Joan and Jack caught in the water and having to go over a waterfall along with finding another town and dancing in a fiesta. This is a great classic 1980's film. 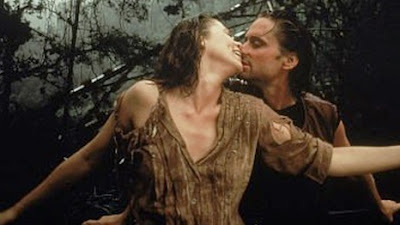 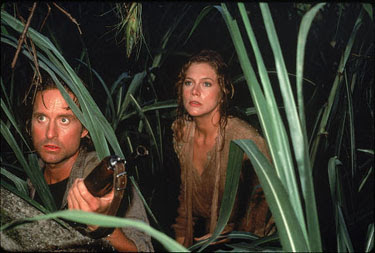 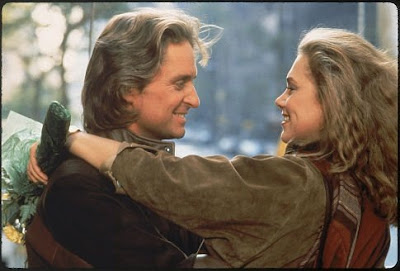 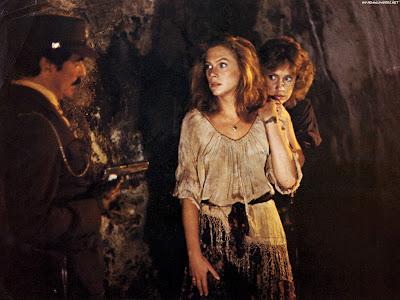 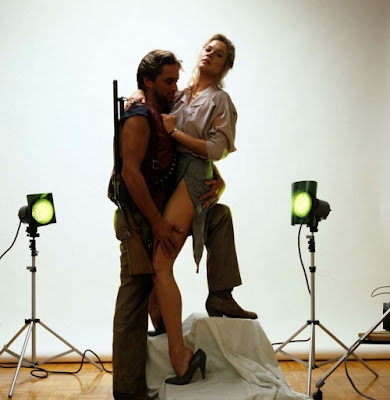 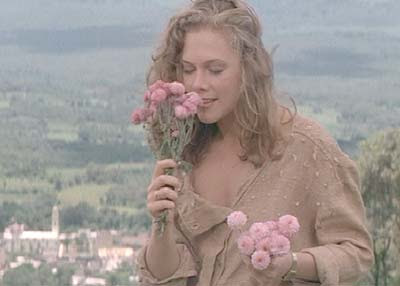 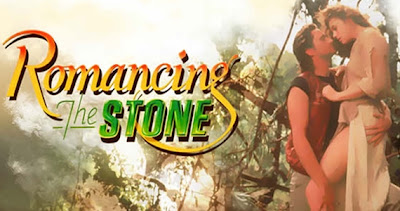 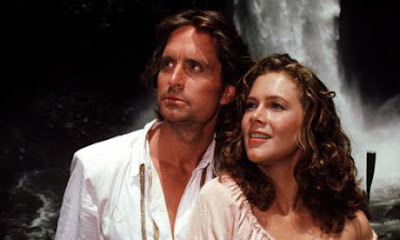