Here is our sixth installment of our classic radioland article for all you lovers of movies and radio programs. We are now brinings our first leading lady Lucille Ball and rather than a feature film presented via the radio we have her beloved radio program: "My Favorite Husband." 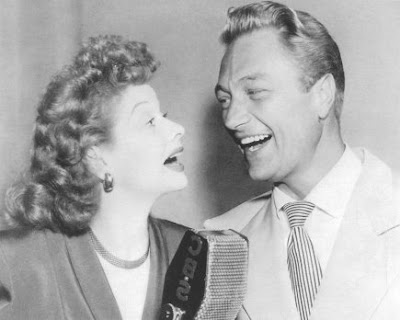 This superly successful radio show was the reason why CBS took on Lucille Ball and the tv show: "I Love Lucy." In the radio program we have Liz (Ball) & George (Denning) Cooper (Cougat the last name at the begnning of the series).  During the beginning of the show's run in 1948 the couple was a upper class banker and wife couple when then the name change happened so did the role of a middle class couple to have listeners be able to be more apt to identify with them.

CBS, then wanted the show to go onto TV and wanted the original team to continue though Lucy wanted her husband Desi to play her on-screen husband istead and insisted on it. The network agreed and came up with the new title and the ral life couple took the show on the road to show CBS just how popular and well liked they could be and it was an enormous hit, and as they say the rest was history!


So now here is the full length episode for your enjoyment from the first season in 1948 of: "My Favorite Wife" entitled: "The Cugat's Tenth Anniversary" (this is still when the show had the couple with the original last name). HAPPY RADIO LISTENING!!!!