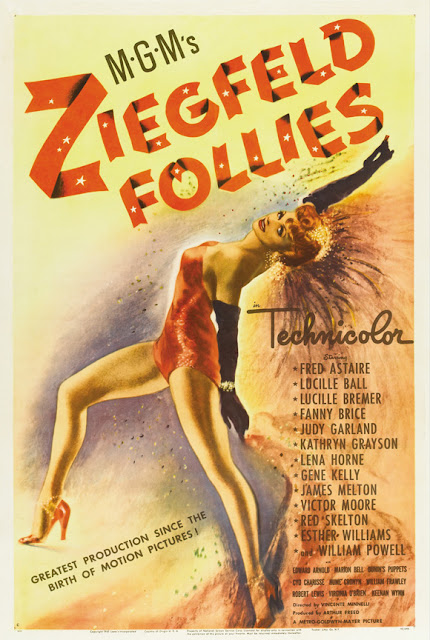 ﻿
MGM Studios allowed this film the entire lot of stars to use for the filming and had a HUGE budget of one million dollars!

This is the first MGM musical to actually not have a plot what so ever! It is simply a musical with several segments to be exactly like "Ziegfeld Follies" was done on Broadway to be a musical and eye delight filled with musical splender and large sets. This classic is the take of what Florence Ziegfeld since passed would have done in the age of the motion picture with his beloved follies. I believe he would have done it exactly the same with the availability of the star power of MGM along with the grand sets, directors, costume designers, cinematographers, make-up artists and more that only MGM and it's MEGA POWER of a studio could do!

﻿ What a lovely musical that is delightful for any musical fan to watch several segments with your favorite stars of the day such as Luciclle Ball & Cyd Charisse in a segment entitled "Here's to the Girls" which Lucille is a ravishing lion tamer whom happen to be taming ladies! Along with Cyd Charisse's dancing through a beautiful set and bubbles, then it is off to watch Gene Kelly and Fred Astaire sing "The Babbit and the Bromide" then we see the sultry Lena Horne sing one of her trademark songs "Love" which is one of my favorites!
﻿﻿ My eyes are simply glues to the screen when watching this gem of a film going back and foth of all the lovely sets and segments, I just love it! More noteworthy segements is with Judy Garland singing, "A Great Lady Has An Interview" along with Esther Williams doing a beautiful swimming number along with the deadpan Virginia O'Brien doing "Bring On The Wonderful Men" also James Melton and Marion Bell do a simply lovely part of "La Traviata" which is oohhh soo red and spectacular! Another is the pairing of dance partners of Fred Astaire and Lucille Bremer doing a number entitled, "This Hearf of Mine" I voulf go on and on with such lovely numbers...wait there is of course Fanny Brice's segment I just can not forget which is from her radio show entitled, "The Sweepstakes Ticket" which is simply brilliant, what a comedian!!!
This is one of those true classic and all time MUST SEE MGM Musicals!!!!
﻿