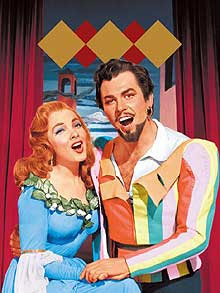 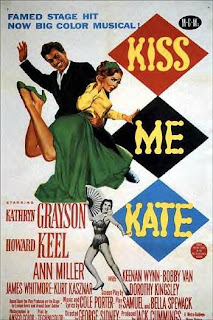 What a lively film production of a cast doing "The Taming of the Shrew" on Broadway along with a lot of high tension behind the curtain! What it takes to put a show together with egos and financing involoved and this is all before the show is even started with opening night.

This 1950's MGM classic directed by the famous George Sidney is a not miss for any musical or film buff of classic films. MGM was trying to keep people interested with attending the movie's by putting in place in this film a 3-d affect if you will where Ann Miller would throw out items when dancing and make it more real life. An innovation if you will that movie company's were trying to find in the event of everyone staying home due to television. 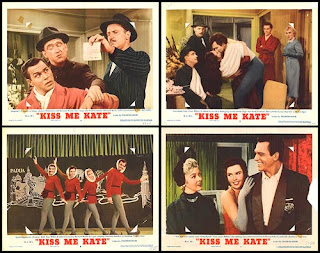 Lilli Vanessi (Grayson) and Fred Graham (Keel) had a past as in having a romanitc relationship with one another and were married. Both are mega stars in the forum of the theatre world. Fred decides to open up a production in NYC of the, "Taming of the Shrew" but as a musical. Before he can get the go ahead he needs investors and an entire cast one of them being the title lead his ex-wive Lilli. They now do not get along what so ever so this is going to be an extremely difficult situation for the road ahead. Fred now is dating this younger, leggy and attractive dame named Lois (Miller) whom is a dancer by trade. At the same time Lilli is engaged to a cattle barron in Texas so both are completely through with each other. Lilli decides since the production sounds well thought out to give it a chance even though it is going to be with her ex-husband. They both meet at his apartment and run through a musical number and things ignite! 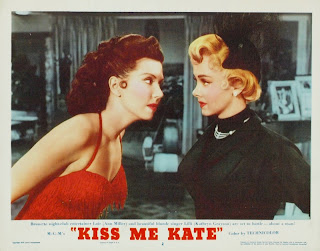 The fireworks of anger are back as usual between the both.  While they are both going over the production younger girlfriend Lois enters in and is ready to show what she has to be part of the production that Fred prmised to her. Lois now has on a very eye catching red sequened short outfit and sings, "Too Darn Hot!" (Ann Miller nails this!). 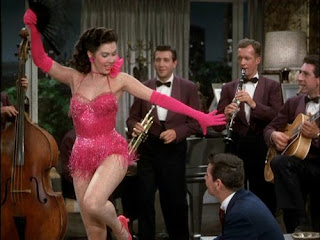 Lilli can not believe her eyes but against her better judgement since knowing it will be a hit of a show signs-up starring alongside as her leading man her ex, Fred. The show then goes into gear and we get to see all the ugliness backstage between the actors and the stress the comes along with getting a show on. We then find a few secrets that Fred is a big time gambler and owes money to a shark that is after him BIG TIME! Two men Slug (Whitmore) and Lippy (Wynn) are sent to the show to get the money and will not leave until they are paid which the problem is the money all tied up with the show! Slug and Lipps actually become part of the cast in the play and sing a very amusing song, "Brush Up Your Shakespeare" which Keenan Wynn and James Whitmore do a fantastic job! Lois also has a man on the side being Bob Fosse who is trying to shake down money as well. There are numerous songs and dance numbers that are lovely such as Kathryn Grayson and Howard Keele singing, "So In Love", "I Hate Men" sung by Kathryn Grayson one of my personal favs "From This Moment On" love the song and dancing sequence with Ann Miller and Bob Fosse!!! 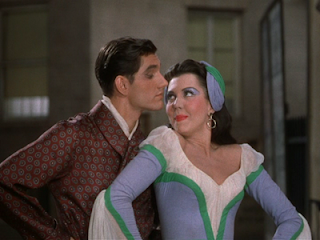 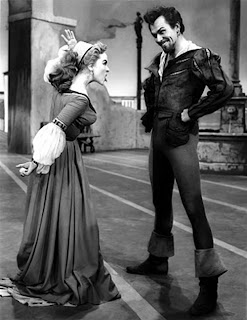 Kiss Me Kate is one of my first memories of watching as a musical when being very young hence why it holds a VERY SPECIAL place in my heart along with "On The Town" and a very select few when growing up that were near and dear to me. I could watch this classic MGM musical over and over again!!!