"Shifting Sands" from 1918 is a classic silent film
Starring: Gloria Swanson, John Stanford & Leone Carton
Directed by: Albert Parker
Note: I have as of this evening (Nov 5, 2010) finally watched for the first time "Shitfing Sands" and enjoyed the film, granted not my favorite but worthy of any film buff or silent era fan...trying to catch-up on my silent film watching which I am a bit behind with....have a few Gloria Swanson "must watch" on my list amogst others!!!!

Plot: Gloria Swanson plays Marcia Grey whom has had a very rough life. Marcia is a struggling artist whom is trying to provide the food and all things required for her and her sister Cora (Leone Carton). Since it is during WWI things are especially hard for both single ladies at home trying to make it. Marcia is then convicted wrongfully of a crime. When Marcia's time is up she comes out and decides to turn the tables around on the wealthy German man whom made the issue for her in the first place. A well placed marriage and then her attempts to get back at the wrong doer when blackmail is used to help the German cuase during the war.
I never grow tired from watching Gloria Swanson on screen since she is my all time fav leading lady of the silent film era!!!! 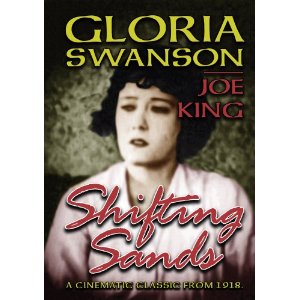 Here is a the beginning of "Shifting Sands" gotta love it...hope you enjoy!!!