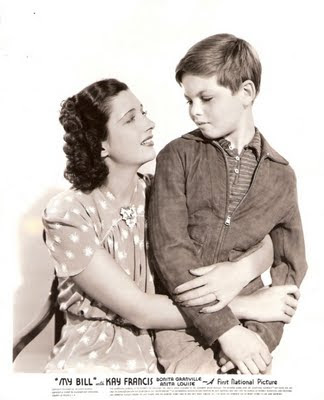 Here is our first installment of our series of "Classic Radioland" which will bring us back to the fun days of sitting around the radio and turing the dial to all the lovely performances of the best of the best.

Our first is an underrated film made in 1938 starring Kay Francis and John Litel from Warner Bros. This time for the radio production on "Lux Theatre" we have Kay Francis reprising her film role and Warren William. In the 1930's Kay Francis was one of the top leading ladies in Hollywood with her films grossing a lot. This film "My Bill" was a big turn for her career to play an older woman and an aunt to top it off not the usual scene stealing beauty with all high fashions! 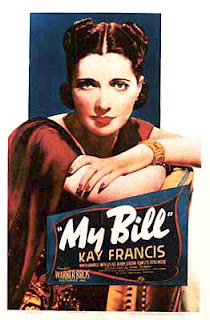 Plot:
The story takes place in Connecticut where a single mother of four is having to deal with bringing up her children. William is the only one of the four children that decides to leave the widowed mother to move in with the much wealthier aunt who can give them everything that the mother can not. A wealthy neighbor of the young mother becomes friends with them and when the older individual passes leaves a large inheritance to the young boy. What a lovely film that is truly underrated that many forget about now that was a turning point for Kay Francis and her acting career. The radio production is lovely and provides the similar nuances that the films does and allows you to have an imagination with areas.

Now sit back and relax and listen to "My Bill" from the Lux Theatre which originally aired in 1941. Reserve an hour of time to be all your's and put yourself back in time with a nice glass of coffee or wine and be nice and toasty warm....let's have our first radio listening party and enjoy!!!!