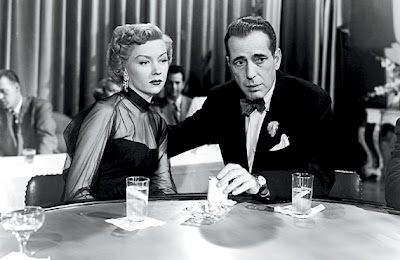 Tagline:  "THE BOGART SUSPENSE PICTURE WITH THE SURPRISE FINISH" 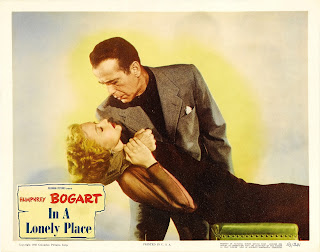 Background:
Adapted from novel written in 1947 called "In a Lonley Place" (author Dorothy Hughes).
Film produced by Humphrey Bogart's Santana Productions.
In 2007, it became part of the National Film Registry.

Note from the Movie Gentleman:
Gloria Grahame did not often have top billing as leading lady but she SHINED in this film which was one of her best. As a dark film noir showing that she had many sides to her and this one she could pull off and was excellent! 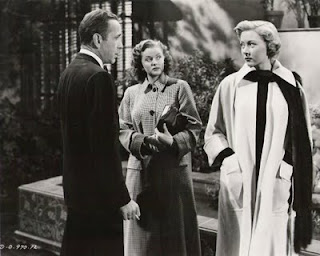 A not so lucky screenwriter who had hits in his past and is searching for the next big one, Dixon "Dix" Steel (Bogart) stops at a nightclub prior to meeting up with his agent Mel Lippman (Smith). At the nightclub Dix is being talked into his book being adapted into a movie and while there get's into a fight with a much yuonger director who bad mouths Dix's friend. While at the club Dix meet a lovely hat check girl named Mildred who ends up going home with him and is itnerested in finishing his book. So both leave the club and head back to his home. Along the way to his apartment he crossed paths with a new tenant named Laurel Gray (Grahame).  Dix is being a gentleman and only wants to find out Midlred's true opinion of his book so then she enters his home to have the discussion. Mildred tells him what he already knew that the novel was no good. So since there was no where else for the conversation to go Dix provides money to Mildred to leave and to take a cab home which she does. We then see the next morning that Dix is surrounded by many people such as detectives that tell him that Mildred was found murdered the night before and of course Dix is prime suspect. Laurel the new tenant of the building goes into the police station to confirm what she which was Mildred leaving alone by cab though the detective still does not believe it. Dix has a hard time with emotions and this gives more cause to his guilt. 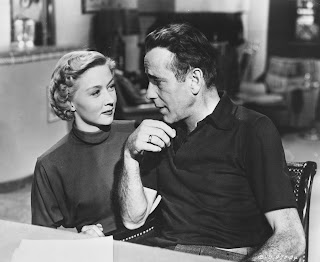 Dix's finally is able to be relased and goes back home and gets to know Laurel who is single and an inspiring actress. They both start have a large attraction for one another which ignites Dix passion for writing again with the quality that and drive he has not seen for years. The new couple start seeing each other all the time and are very much in love and are very good for one another....Dix has a love in his life which breaths new life into him that was sorely missing and is a gorgeous muse. Later Laurel finds out from the detective that Dix has a lengthy passed of violent behavior and to be very cautious with him. A high strong and violent Dix is shown when Laurel is in the car and he finds out that she was told about him so he then drives at high speeds with her in the car very reckless and is sideswiped by another car. This brings a new level of emotions for Laurel where she needs medication to sleep and to calm down due to Dix and his new and dangerous ways. Laurel is scared bottom line of what he will do next....which then follows with many twists and turns of what will occur...is Dix the real killer and is not to be trusted??? This is a great film noir..that you will have to see!! 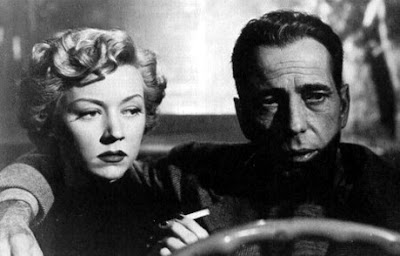 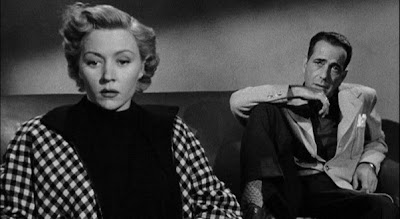 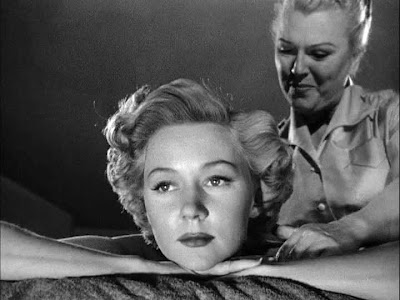 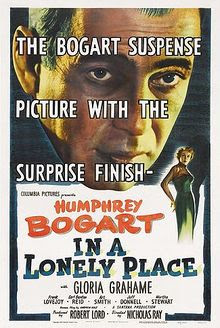