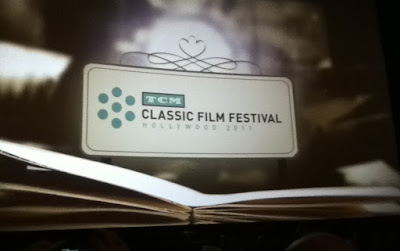 Note from Classic Movie Gentleman:
Is very happy to have guest reporter, Christina Stewart a fellow film buff writing an article for "Love Those Classic Movies!!!" Thank you Christina for your outstanding contributions!

The 2nd annual TCM Classic Film Festival was held in Hollywood California from April 28 – May 1.  I looked forward to this event with excitement, nervousness, and awe.  The last time I was in Hollywood was about ten years ago and wondered how and if it had changed.  The festival was headquartered in the historic Roosevelt Hotel with Graumans Chinese Theatre, the Egyptian Theatre, the Mann's Chinese Multiplex, and the Music Box as festival venues.  Hollywood did not disappoint, nor had it changed – at least not the festival route along Hollywood Boulevard.

I was fortunate enough to have a friend along for this wondrous adventure and we both spared no expense on having Spotlight passes.  This pass allowed us to walk the red carpet for the An American in Paris premiere at Graumans Chinese Theatre and to attend the Vanity Fair after party on the opening night of the festival.  A true Hollywood experience!

We walked the red carpet as if we'd been doing it all our lives; smiling, waving, laughing, stopping for photos, and the like.  We paid homage to the film by dressing in the style of the film; Allison as one of the Red Dancers from the closing ballet sequence and I in a retro 1951 peacock design dress complete with crinoline and black feathered fascinator.  Watch out!

Once in the theatre, we saw Illeana Douglas, Priscilla Presley, Hugh Hefner, Alexis Gershwin, Kevin Brownlow, and Mrs. Gene Kelly who sat right behind us.  Leslie Caron introduced the film with Robert Osborne and she was truly a delight.  She looks and sounds fantastic, plus the following day she presented her new autobiography, Thank Heaven: A Memoir.

The screening of An American in Paris was absolutely fantastic!  Seeing it on the big screen and in such a beautiful theatre as Graumans brought tears to our eyes, and this would not be the last time.  The full scope of watching a classic movie in a classic movie theatre is an overwhelmingly emotional experience.  The magic of the moment was not lost on us and I can confidently say that it was not lost on most of the audience.


After the screening we made our way to the Vanity Fair after party.  There were poster blow ups from An American in Paris everywhere.  With champagne in hand, we mingled with other festival attendees, TCM staff, young Hollywood, industry VIP's, and most importantly of all – classic Hollywood.  Sure we had a nice chat and photos with Ben Mankiewicz, but seeing, talking with, and having photos with Mickey Rooney, Jane Powell, Marni Nixon, Anne Jefferys, Ann Rutherford, Jane Withers, Eva Marie Saint, Dickie Moore, Hayley Mills and Juliet Mills, and Margaret O'Brien was the reason we were there.  What an evening to remember!

The next day was the first full day of the festival for us.  We watched Gold Diggers of 1933, and let me tell you – seeing this film on the big screen finally made me understand why the censorship movement was such a hot topic at the time of its release!  Wow!! IF you ever get a chance to see this great film on the big screen, DO IT!  After Gold Diggers we made our way to the Egyptian for Royal Wedding with an introduction by Jane Powell and for Girl Crazy with an introduction by Mickey Rooney.  These screenings were followed by our final film of the day, Seven Brides for Seven Brothers again with Jane Powell in attendance.  Jane and Mickey are such wonderful people, it was quite a treat to see them and hear their stories.

Day two of the festival started with an absolutely hilarious bedroom farce called This Is The Night from 1932.  The film stars Thelma Todd, Lili Damita, Charlie Ruggles, Roland Young, and in his first film Cary Grant.  Cary's daughter, Jennifer Grant, talked about her father and about her new book on their relationship, Good Stuff.  We were very privileged to watch the screening with famed film historian and archivist Kevin Brownlow.  He described the film as, “Delicious!” For me, this film was the sleeper hit of the festival.  After This Is The Night we made our way to see Hayley Mills introduce The Parent Trap at the Egyptian.  Packed house and she was delightful to watch, both in person and in the film.  We finished the day with a fun screening of a Fred Astaire and Ginger Rogers classic Shall We Dance.  Alexis Gershwin was in attendance talking about her uncles and the timelessness of the film.

The final day of the festival started with another emotional screening at Graumans Chinese, where we watched That's Entertainment!.  Leonard Maltin gave a loving introduction to the film and talked with dancer Marge Champion afterwards.  Marge was great!  She is 91 years young, looks amazing, and she danced up the aisle!  What a remarkable woman!  Being at the screening and knowing we will never see the likes of the talent in the film again, hits a bittersweet nerve.  The digital preservation of the film was done subtly and with care.  Only once was there a noticeable color manipulation issue.  As we were saying a sad long goodbye to Graumans Chinese, we literally bumped into Alec Baldwin and Warren Beatty!  What a way to end a screening! 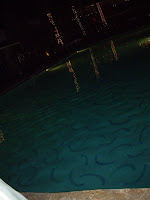 The closing festival party was held at Club TCM in the Roosevelt Hotel's Blossom Room, where the first Academy Awards was held.  After having parting words with other festival attendees we had met along our whirled wind adventure, we – again with champagne in hand – spent our last glowing TCM moments reclining by the Roosevelt's pool.  Snapping pictures, relaxing, laughing and getting a bit nostalgic for the long ago days when this pool was the place to be and to be seen.  A beautiful night under the stars was the best and most classic way to end this most classic of film festivals.