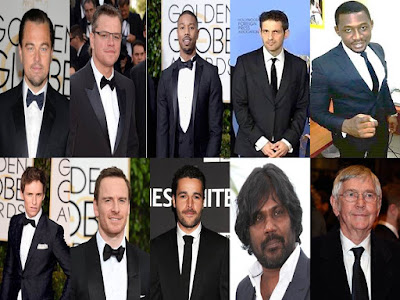 Best Leading Men of 2015 - Here at "Love Those Classic Movies!" we will celebrate the current classics being leading men, women, directors, films and more. This is the 2nd Annual LTCM Awards for current classics.

The first category as one can deduce is the; "Best Leading Men" where the Top Eight will be celebrated. Here is my awards that I truly thought were outstanding roles played by outstanding leading men. My top 10 are in random order (from top left to right in photo): Leonardo DiCaprio, Matt Damon, Michael B. Jordan, Géza Röhrig, Daniel K. Daniel, Eddie Redmayne, Michael Fassbender, Christopher Abbott, Jesuthasan Antonythasan, and Tom Courtenay.

I truly loved all of these actors in these roles and specifically in these respective films. There are as in all year's runner's-up that are worthy of mention such as: Bryan Cranston, Will Smith, Michael Caine, Johnny Depp, and Tom Hardy.

Now it is your turn my fellow classic movie buffs - Share with us your thoughts.
Such as:
What would your Top 10 Leading Men for 2015 be?
Do you agree or disagree with my list, why?